All Students! Remember to check your Grade Page for current HW assignments

Posted by Mrs. Santangelo at 9:02 AM No comments: Posted by Mrs. Santangelo at 8:54 AM No comments:

Its great to see everyone back in school, looking so well, and rested, and ready to go! We've all begun the year by studying the 5 Themes of Geography ...MR H/ELP... Going forward, Fifth Grade will focus on the Western Hemisphere, with primary emphasis on the broad sweep of American history. Sixth Grade will spend the year in the Eastern Hemisphere, learning about the origins of civilization, exploring the ancient world through to the modern. Seventh and Eighth Grades are rooted in American history: over the course of the 2 final years of elementary school, we delve more deeply into the events that have shaped our country, from its original peoples through to the present day. So --- Let's Go! 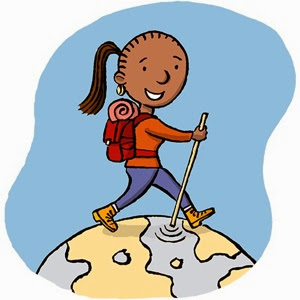 Recently, I subscribed to 2 newsletters, both easily googled, that parents may find both interesting and useful. The first is Mike Allen's news round-up from Politico: handy, capsulized versions of the day's news stories; and Annie Murphy Paul's Brilliant Report, which focuses on current brain research, including 'best learning practices.'

And finally, to inaugurate this academic year's weekly "Current News" links, 2 compelling articles from the NY Times about education:

The Benefits of Failure
Posted by Mrs. Santangelo at 6:55 AM No comments:

I had a busy summer! I learned how to do genealogy for the DAR (Daughters of the American Revolution), took an online course about sharing great works of art in the classroom
, and took a few college-visit trips with my daughter, Aurora. I also visited my family in New Mexico---while there, we--2 of my children, and my sister--hiked around White Sands National Monument. 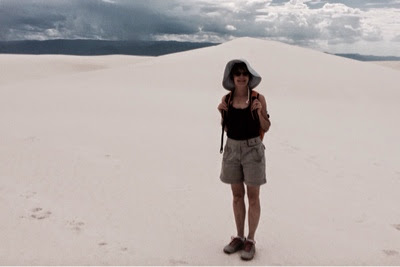 That's me, in the middle of the sands. It looks like snow, but it's pure white gypsum. This was really a unique experience: it was still and quiet, just like it is here in Brooklyn after a new-fallen snow...only 90 degrees!

Back home this past weekend, my husband and I attended the commemoration of the Battle of Brooklyn (1776) held nearby at Greenwood Cemetery---this battle was the 1st one that we fought as a new nation, having just declared our independence from Britain the month before. We didn't win this one, but George Washington and 10,000 American troops managed to escape to Manhattan thanks to the heroic fighting of an American regiment from Maryland, the Maryland 400. They pretty much sacrificed their lives so our guys could regroup to fight another day. And we all know what happened then! 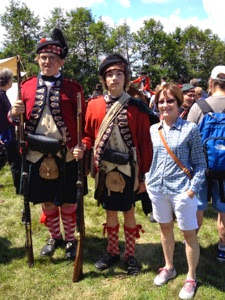 There were re-enactors at the Commemoration, so that's me with the Scots!

What did you do on your summer vacation? Send pictures!
Posted by Mrs. Santangelo at 7:42 PM No comments:

The End of Summer

We have about 2 weeks remaining to our Summer Break---sad but true! I hope you've done lots of wonderful things with your family and friends, gotten lots of exercise, and managed to de-stress. Right about now, if you haven't done so already, you want to get that summer schoolwork done, and flex your mind-muscles by reading some good books. That should put you in a good place to begin the new school year fully powered up. I look forward to seeing you on Sept 3rd, and hearing stories of your adventures!

Posted by Mrs. Santangelo at 2:29 PM No comments: Here's the latest:
The prisoner exchange of Bowe Bergdahl for 5 Taliban insurgents imprisoned at Guantanamo Bay continues to draw controversy: Critics of the Prisoner Swap
Pope Francis and the presidents of Israel and Palestine--Christian, Jew and Muslim--joined together for a day of prayer and reflection at the Vatican: At the Vatican, Day of Prayer
And check out this amazing story, from my hometown, Pittsburgh: Killing a Patient to Save His Life


Op-Ed  columnist Nicholas Kristof, a personal favorite of mine, responds to the kidnapping of the Nigerian schoolgirls with this thoughtful piece about the value of education: What's So Scary About Smart Girls?

And here's something of local interest:
Revolutionary War Mystery
Check out this 2012 article about the whereabouts of the 256 bodies of soldiers of the First Maryland Regiment, whose heroic sacrifice during the Battle of Brooklyn in August 1776 allowed George Washington and rest of the army to escape the British onslaught. Perhaps the soldiers are buried under a vacant lot at 3rd Avenue and 8th Street...but builders would prefer to develop the land into high-end apartments, or maybe a school, rather than authorize an archeological dig. After all, this industrial warehouse-filled area of Brooklyn is rapidly gentrifying (care for a trip to Whole Foods? the only one in Brooklyn is now open for business at 3rd and 3rd). This ongoing issue brings modern progress and the preservation of our historical memory head to head. What is right? Whose interests should win?


Find these stories and more in:
The New York Times

Posted by Mrs. Santangelo at 7:17 AM No comments: